The Olympic Games, My Highs And Lows

Hat's off and a huge hip hip huzzah to London and all of Great Britain for hosting a truly spectacular Olympic Games.  I always enjoy watching the games, though often I end up feeling like a big underachiever!  I'm sad that the games are winding down but it will be nice to catch up on some sleep.  Here are some of my thoughts and musings.

My number one highlight is Oscar Pistorius, the amazing track athlete from South Africa.  He represents the courage, strength and determination of the Olympic spirit.  What an inspiration!

On the heals of Oscar is Grenadian sprinter Kirani James.  Not only did he win Grenada's first Olympic medal, a gold in the men's 400 meters, but he too showed true Olympic character.  Just after winning his semifinal heat, James approached Oscar Pistorius, hugged him and asked him to exchange bib numbers in a wonderful sign of admiration and respect. 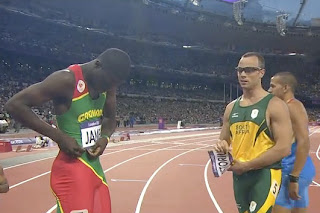 Manteo Mitchell showed amazing strength and courage as he completed his leg of the men's 1600 meter relay semi-final with a broken leg.  I can't even imagine the pain.  He was replaced in the finals by Bryshon Nellum, an athlete who's career almost ended three years ago when he was shot in both legs in a random act of violence.  He will carry the American flag in the closing ceremony.  Usain Bolt showed tremendous respect for a nation unknown to me.  He stopped a reporter's interview when he realized a medal ceremony was in progress.  He stood silently and then resumed the interview when the nation's anthem had ended.

Michael Phelps.  Can I say anything that hasn't already been said?  He became the most decorated Olympic athlete of all time at these games.  Eighteen gold medals, two silver and two bronze in a career that spanned four Olympic games.  His name will always be included with our greatest Olympic heroes.  Owens, Didrikson and Thorpe to name a few.  We also saw the depth of talent in the pool (pun intended) with amazing performances from Missy Franklin, Ryan Lochte, Allison Schmitt, Nathan Adrian, Dana Vollmer, Cullen Jones and 15 year old newcomer Katie Ledecky.

We saw the final match of a powerhouse duo that was truly unbeatable.  Kerri Walsh-Jennings and Misty May-Treanor won gold medals in women's beach volleyball in three consecutive Olympic games.  What a way to close the book on their career together.  It's so hard to envision Kerri playing with anyone other than Misty. 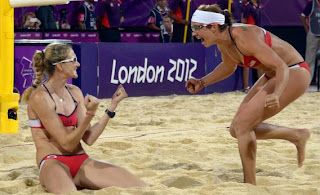 The women's gymnastics team provided the United States with emotional highs and lows.  The team achieved something none of its predecessors were ever able to accomplish, the team gold medal as well as gold in the women's all around.  In doing so, Jordan Wieber broke our hearts, Gabby Douglas stole our hearts and McKayla Maroney embarrassed us with her display of poor sportsmanship.

We met athletes from non-marquee sports.  Terrence Jennings won a gold medal in tae kwon do.  What inspired him to try the sport when he was a child?  The Teenage Mutant Ninja Turtles.  We met women's diver Brittany Viola, the daughter of former MLB player and World Series MVP Frank Viola.  We witnessed the agony of Morgan Uceny, who fell during the women's 1500 meters.  Our hearts hurt for her as she sobbed and pounded her fists on the track.  Her dreams shattered in a second.  Georgia's own Reece Hoffa, given up for adoption when he was four years old, always speaks lovingly of both his moms.  His "B-Mom" the biological mother who gave him up so that he could have a better life and his "A-Mom" his adoptive mother who was sitting in the stands, cheering him on.  Reece won a bronze medal in the shot put, his first medal in his third Olympic games. 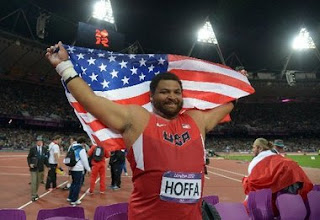 Team GB has had a brilliant showing in these games, keeping so many medals in the British Isles.  The Brits haven't done this well since 1908.  Their low point, winning only one gold medal and just 15 overall in Atlanta.  In these games, the Brits first gold came in an equestrian event.  Since then they've won 21 medals on and in the water, 12 in cycling and five on horseback, leaving them with 60 overall...and the games aren't over yet.  There have been so many stellar performances but my personal favorite came from a Scot, Andy Murray!  After losing the men's singles final at Wimbledon to Roger Federer only a month ago and feeling that he let a nation down, Andy roared back to beat Roger in straight sets on the very same court.  It was a poetic victory.

I loved seeing the Royal family showing their support for the games and the British athletes.  From Queen Elizabeth's surprise "performance" at the Opening Ceremonies, to Princess Anne being a fixture at the equestrian events, to Prince Charles and Camilla cheering the athletes on to victory, to Harry, Wills and Kate seemingly attending every other event on the schedule, the royals reminded us they are people, sports fans and they enjoy a good party too. 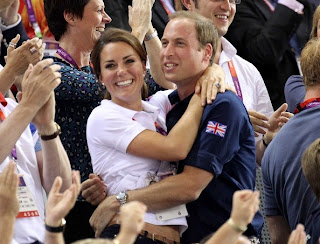 We've been transfixed by the story of Caster Semenya, the South African runner who not only had to prove herself on the track to make it to London, she also had to fight to prove her gender, multiple times.  She withstood the accusations, the speculation and the humiliation in order to run for her country in the Olympic games.  She runs for gold tonight.

Athletes from Cypress, Botswana, Guatemala and Grenada all medaled for the first time in their nation's history.

Lest I forget the weird.  We saw a scandal in women's badminton and two Belgian athletes sent home early for partying too hard.  And yes, I'm still looking for an explanation as to why trampoline is an Olympic event and baseball and softball are not.  Anyone?

Posted by diamondsanddugouts at 7:54 PM