It took awhile, but I finally saw Moneyball.  Everyone told me I needed to see it and I have to say the movie was very well done and I really enjoyed it.

I'll be honest, I don't have a huge recollection of what was going on with the Oakland A's that season.  Being a National League girl, I was busy keeping up with the Braves and the teams they were competing with.  It was really  fascinating to see how the approach of Billy Beane and Peter Brand changed the status quo of the way a major league baseball team can be assembled.  I also got a kick of seeing former and future Braves portrayed in the film.

So on that note I decided to list, in no particular order, some of my favorite baseball movies:


The Natural
Eight Men Out
Bull Durham
For Love Of The Game
The Bad News Bears (the original, no remakes, no sequels)
Pride Of The Yankees
Field Of Dreams
Major League (again, only the original)
The Rookie
The Sandlot (highly recommended by my nephew)
And now I'll add Moneyball to the list.

There are a couple I haven't seen but I probably should:
Cobb
Mr. 3000

Did I miss any?  And what about Brad Pitt and Jonah Hill?  Were their performances Oscar worthy?
Posted by diamondsanddugouts at 1:50 PM 6 comments:

I was wondering what that ruckus was yesterday.  Had Kilauea erupted again?  Was there an earthquake somewhere?  Then I understood.  It was Detroit, the jumping up and down, the yelling and screaming, the sheer joy and excitement of Prince, their Prince, coming home to the kingdom where he grew up.

Once again, I didn't see this one coming.  I really need to polish my crystal ball!  But seriously, who was expecting this?  Two weeks ago the Tigers weren't in need of a 1st baseman, especially one who wanted a long-term deal.  Even a week ago, Tigers management was looking for a short term fix for Victor Martinez's season-ending injury.  Did Tigers owner Mike Ilitch pull the trigger once again?   The Tigers have made moves late in the off-season before and they've worked out well.  Pudge, Mags and Damon.  And Ilitch, he wants a World Series...badly.  How badly?  In Prince's case, 9 years, $214 million kind of badly.

There will definitely be a on-field ripple effect with Miguel Cabrera moving back to third base.  What does that mean for Brandon Inge and Wilson Betemit?  We'll have to wait and see.  There are a lot of changes going on in Motown.  And the one big change they're waiting for, hoping for, involves the last win of the season and lots of champagne.  Can their Prince also be their savior?

Tiger fans, I want your insight...
Posted by diamondsanddugouts at 11:01 AM 4 comments:

A Little Bit Of Housekeeping

Braves fans, it's time to update your score card.  Spring Training is right around the corner (YIPPEE!) and I thought it would be a good idea to remind y'all of the changes that have occurred during the off season.  A few of these changes came as no surprise (Derek Lowe) and the one big surprise to me is that there hasn't been a big signing.  The good news about that?  The Braves have a stellar farm system!!

So sharpen your pencils and make note of...

That's where things stand now.  Your thoughts?
Posted by diamondsanddugouts at 2:11 PM 2 comments:

The Baseball Hall of Fame's class of 2012 is a small one. It's a class of one but it is certainly a stellar class.  Congratulations Mr. Barry Larkin! 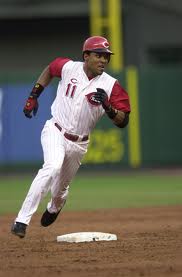 I always loved watching Barry play.  He was a lifer who played the game right and he has done the Cincinnati Reds proud.  I'm glad that he's in the broadcast booth now and I always enjoy his coverage and insight on the game.  Barry received 86.4% of the vote.  It was his second year on the ballot.  No one else came close.  I thought Jack Morris would do better.  He wasn't always one of my favorite players as he was the architect of many nightmares in 1991 and 1992.  Hopefully he'll do better on next year's ballot.

Of the six Atlanta Braves on the ballot, only two garnered enough votes to remain on next year's ballot.  Fred McGriff received 23.9%  of the votes needed and Dale Murphy received 14.5%.  Next year will be Murph's last chance.  After that he'll only be able to enter the hall through the votes of the Veterans Committee.

Before the ballots went out, Braves President John Schuerholz sent a letter of support to the Hall of Fame voters, reminding them of the kind of player and kind of man that Dale Murphy was, and still is today.

For those of us who grew up with the Braves and watched Murph play, we remember more than numbers.  We remember an exciting player who we loved to cheer for during a time that there wasn't always a whole lot to cheer about.  We remember a smiling guy who played hard and set a great example on and off the field.  Dale Murphy wasn't glamorous and all of his flashiness was saved for the for the field.  He was the kind of player that baseball cherishes and immortalizes.  He is the kind of player and man that the Hall of Fame would be lucky to call a member.  Chances are that Braves fans will be disappointed again next year.  That's so ironic as Murph never, ever disappointed us.

Kathy Porter's family's world changed in an instant on a beautiful Saturday afternoon.  Kathy lost her life and her family's world was forever shattered.  They were doing what thousands of other people were doing that day.  They were going to the Chick-Fil-A Bowl.  The whole family.  It was going to be a wonderful day.

It's hard to understand or even to try to make sense of tragedies like this.  I believe that time and distance give us some sort of clarity but for some, those closest to the pain, it's never understandable.  They simply learn to live with it.  Even worse for the Porter family, is that they must suffer their tragedy publicly.  The circumstances force it to be a newsworthy story that will be reported for months.

My heart breaks for the Porter family.  I hope that their faith and their love for each other sees them through.
Posted by diamondsanddugouts at 1:02 PM 1 comment: