Say It Isn't So Rossy!

Did you think I had fallen off the face of the earth?  Or perhaps I had sunk into a deep despair with the end of the 2012 season?  Or perhaps I couldn't bear to think about a Braves team without Chipper Jones?  Truthfully, it's none of the above.  Life got busy and I had to take another personal "rain delay".  But now I'm back and in a state of shock.

Braves back up catcher David Ross signed a two-year, $6.2 million deal with the Boston Red Sox.  What!?!  I'm shattered.

For the past four seasons, David Ross and Brian McCann have made up the best catching tandem in all of baseball.  The best by far.  It didn't matter who was behind the plate, offensively or defensively, the team was just as strong with either player behind the dish.  This was a fact that was commented upon regularly during national broadcasts.  And with the injuries that plagued Brian McCann this season, David Ross was more valuable than ever.  As great as his offensive numbers were this year, his game calling and defense were even better.  It spoke volumes that Fredi Gonzalez chose to start David over Brian in this season's wild card game.

David Ross wasn't just valuable on the field.  He was equally as valuable, if not more so, in the clubhouse.  He is a born leader.  He was one of the most respected voices in the Braves clubhouse.  He knew when to keep it serious and when to use his sense of humor.  He was best at keeping it light and loose and keeping the team on an even keel.  Bobby Cox loved him.  That says it all.

The Braves couldn't come close to offering the deal that the Red Sox did.  The Braves, with their mid-market payroll, were looking to offer a one-year deal to a catcher who will turn 36 in March.  The Red Sox, with a much larger payroll, are doubling David's salary.   In fact, over the next two seasons, David will make just slightly less than he did in his four years with the Braves.  As much I hate to see him go, I can't for one second blame David for making this move.  He'd be crazy not to take it.

David's departure leaves the Braves in a tough spot.  Brian McCann will miss at least the first 2-4 weeks of the 2013 season due to shoulder surgery.  Christian Bethancourt is playing great at Double A, but at only 21 is he ready for the majors?  The Braves want to take it slowly with him.  There's also Evan Gattis, although he hasn't played beyond the Double A level either.  The most likely scenario?  The Braves will go out and pick up a veteran catcher who is already playing at the major league level.  One other thing to remember, the Braves just picked up the $12 million option on Brian McCann for 2013 but he will be up for free agency at season's end.  Braves fans may see a lot of changes at the catcher's position over the next few seasons.

All in all, I'm so sad to see the Braves lose a player, teammate and man like David Ross.  He was great for the Braves and he's great for baseball.  He represents the game well.  I can only hope that when David Ross' playing days come to an end, he chooses the Braves organization to being his career as a manager.

David Ross by the numbers: 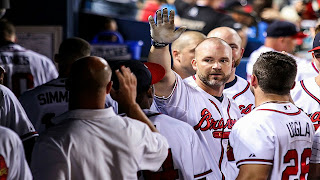 Photo couresty of Daniel Shirley-US PRESSWIRE
Posted by diamondsanddugouts at 11:09 AM 2 comments: