Tim Hudson hasn't worn his socks high since his days at Auburn and early on in the minors.  Last night, he said he was trying to tap into the fountain of youth by wearing them high once again.  Those socks certainly worked their mojo as Huddy pitched a stellar game and led the Braves to a 6-0 win over the Padres.  Add that to a Nats loss and the Braves are 4 1/2 back in the east.

At 37 years old and pitching in his 14th season, Tim Hudson looks anything but old.  He may have a cranky ankle (not a cankle!) that barks at him every so often but if you look at the numbers Tim Hudson is, without a doubt, the most underrated pitcher in baseball.  Braves fans know it.  A's fans know it.  My friend Julian knows it.  What about everyone else?

Huddy came back strong after his 2008 Tommy John surgery and he's had just as strong a comeback from back surgery this past off-season.  His stats so far?  In 2012 Tim Hudson is 12-4 with a 3.59 ERA, opposing batters are hitting just .241 against him.  He's pitched 128 innings in which he's struck out 79 batters and walked only 35.  He's pitched one complete game and has three shutouts.  Huddy got his 100th win as a Brave versus Houston earlier this month, a team he's never lost to.

How do these numbers compare with his contemporaries?  Let's see.  And since Tim takes such pride in his hitting, I tossed batting averages in there too.


After comparing the numbers, you have to agree.  Whether the socks are high or low, Tim Hudson is the most underrated pitcher in baseball today. 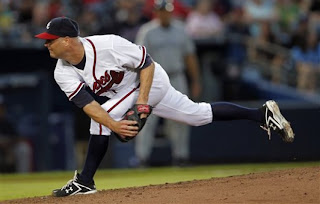 Posted by diamondsanddugouts at 5:39 PM