Congratulations to the Seattle Mariners' Felix Hernandez for throwing a perfect game yesterday.  King Felix pitched masterfully, showcasing his exquisite command of each pitch in his vast and lethal arsenal, reminding us once again why he's one of the elite pitchers in today's game.  He threw 113 pitches, 77 for strikes, and he struck out 12 batters.  In a season that's already been dubbed the year of the pitcher, this is the third perfect game we've seen.  That's in addition to six no-hitters.  With six weeks left in the season I wonder what else is on tap?

As for the Tampa Bay Rays, they were on the losing end of this one.  The Rays have been in existence for 15 seasons.  In that short time, they've had three perfect games thrown against them and been no-hit five times.  Sorry Jenna. 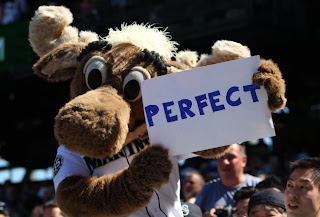 Melky Cabrera.  Suspended 50 games for testing positive for a banned substance.  In essence, he's out for the rest of the season.  Melky had seemingly turned his game around this year.  Now we may know how.  He was having an MVP calibre season, batting .346 with only Andrew McCutchen of the Pirates hitting better.  He was also named MVP of the All Star Game.  The Giants are in the midst of a firey division race, only one game back of their bitter rival, the Dodgers.  Cabrera's selfishness has not only dealt his team a major blow but he has, no doubt, cost himself financially on the open market as he is a free agent at the end of the season.  In hindsight, maybe this explains Melky's bush league antics when the Giants were in Atlanta.  'Roid rage perhaps?  Either way, what a dope.

Posted by diamondsanddugouts at 12:51 PM