Can It Be Any More Storybook?

It's just a bobblehead.  A knick-knack.  A dust collector.  Something for the kids.  Last night it was different.  It was a Chipper Jones bobblehead, given away during his final season.  How could you not go to the game?  And how could you not expect more magic?  I was there.  I expected magic.

I know I sound like a total homer.  I know I write about Chipper a lot.  Here's the deal.  I know what I'm seeing and I'm appreciating it in the moment.  I'm not going to be one of those people looking back and then, after the fact, realize how fortunate I was.  I totally get it now and I want everyone else to do the same.

Thursday afternoon had fans arriving early, not a common occurrence at Turner Field.  The boxes of bobbleheads were stacked high and people were lined up at the gates before they opened.  There was extra excitement in the air and a whole lot of energy everywhere.

So when the man of the hour stepped up to the plate in the bottom of the first inning, there were hopes that he'd give fans something special that night.  He did.  On a 3-2 count, Chipper hit a Jason Marquis slider over the right field wall.  Atlanta fans are pretty laid back but this home run made the ball park erupt.  It even rattled Chipper.  It rattled him to the point that once back in the dugout, his hands were shaking and he spilled a cup of water all over the front of his jersey.  Then a curtain call.

In his third at bat, Chipper took Jason Marquis deep once again.  That hit was hit number 2,700 of his career, placing him at number 32 on the all-time hit list, just ahead of Dave Winfield.  A milestone hit and it was, of course, a home run.  It just had to be.

The Braves do it right.  The music from "The Natural" played as Chipper rounded the bases.  The milestone was marked on the massive BravesVision screen.  And after high-fives and hugs from his teammates, the man of the hour was pressed into a second curtain call.

Is there a Hollywood script writer hiding somewhere deep in the bowels of Turner Field, cranking out magical storyline after magical storyline for Chipper Jones?   I swear there has to be.  This can't be real.  But it is. 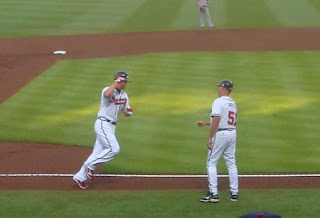 Chipper's first HR of the game.  Photo courtesty of me!

The Braves won 6-0 over the Padres with stellar performances all the way around.  Kris Medlen's pitching was nothing short of brilliant!  He's 4-1 and there is absolutely no way that he can be put back into the bullpen.  We'll see what happens with this six man rotation but I think it will be Mike Minor who's pushed out of a starting role.

Great glove work in the field came from Paul Janish, Chipper, Dan Uggla and Freddie Freeman.  Paul Janish's sliding fielding play to throw out Carlos Quentin's in the top of the ninth was amazing!  What a smooth move by Frank Wren to bring him in.

Jason Heyward's home run in the bottom of the third was his 20th of the season.  He hit 18 homers in his first season and 14 last year.  Jason has definitely left 2011 far behind him.

Posted by diamondsanddugouts at 2:23 PM