Baseball umpires are a nameless group.  That's how it's suppose to be.  They're an impartial group of men who enforce the rules of the game while blending into the background.  Most folks, even those who love baseball, can rarely call an ump by name.  If they can, it's usually because of something negative, a blown call, an odd strike zone or the memory of a favorite player or manager being tossed.

Jim Joyce has been a major league umpire for 24 years.  In a 2010 poll, the MLB players named him the best umpire in the game.  He's umpired in two World Series, three League Championship Series and six Division Series.  Yet, what he's most famous for, or perhaps infamous for, is a blown call.  A call that cost Tiger's pitcher Armando Galarraga a perfect game in the 2010 season.  After watching a post-game replay, Joyce knew he blew the call and the enormity of what he had cost the player.  Joyce immediately went to the Tigers locker room and apologized to Galarraga.  Galarraga said he had no ill feelings toward Joyce after he acknowledged missing the call and apologizing.

Now, perhaps Jim Joyce will be remembered for something so much better.

Last Monday night, Jim Joyce was credited with saving the life of a game-day food service employee at Chase Field in Phoenix.  Joyce and his crew had just arrived at the ballpark and were headed to their dressing room when they saw Jayne Powers on the ground having a seizure.  Joyce rushed over to help, protecting Powers' head.  Suddenly the seizure stopped and Joyce could tell that Powers had stopped breathing.  He began administering CPR, a skill he learned in high school.  Jeff Urgelles, the Marlins bullpen catcher and a former firefighter and paramedic was called and assisted Joyce.  Paramedics arrived moments later, twice using a defibrillator while Joyce continued CPR.  Powers was rushed to the hospital.  Doctor's have installed pacemaker and she is already recovering at home.

Joyce and his wife had a very emotional visit with Powers in the hospital on Tuesday.  Although Powers memories of the incident are hazy, she did remember the sound of Joyce's voice.  As for his actions, Joyce said instinct took over.  "I knew something was wrong," he said. "And I knew if something wasn't done, this lady could actually die in front of me.  It was more instinct than anything else."

That was one head's up play Jim Joyce.  For certain, you are one true, blue angel. 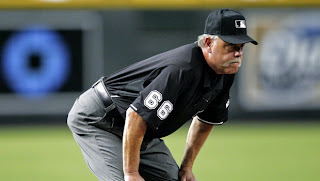 Posted by diamondsanddugouts at 2:11 PM