The Deadline Is Looming

It's totally intentional that I haven't written about any of the rumors, the speculation, the upside or the potential fallout of any trades that did or didn't or haven't yet happened as the deadline approaches.  There's so much going on behind the scenes, bits of information slip out too early and then the "done deal" isn't.  So, I'll just sit back and wait.

I'm glad the Braves have moved on from waiting for Ryan Dempster to make his decision.  Nothing worse than being the bridesmaid and not the bride.  If his heart isn't in it, it will show on the mound.

Speaking of heart being in it, I am loving what Ben Sheets has done so far.  I don't want to jinx anything, but he's pitching lights-out ball and fitting in perfectly in the club house. 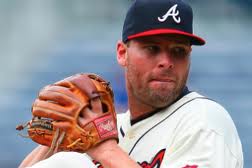 Paul Janish, who I didn't know jack about, has been a great pick up.  I love his defensive skills and he's saved many a run from scoring.  I don't know what will happen after Andrelton Simmons and Jack Wilson are both back, but I'm thinking that Jack may be the odd man out. 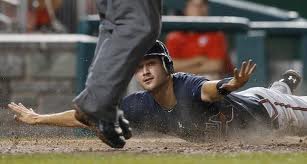 I've been so impressed by the way Mike Minor has stepped it up since the loss of Brandon Beachy. Last night the Braves pitching staff retired 16 Phillies in order. That's what we want to see!

In the meantime, Miguel Batista has been picked up, likely as a long reliever.  Jair Jurrjens will head to the bullpen which will put Kris Medlen back in a starting role.  A bit of a merry-go-round that could change in a millisecond.

As for me, all I want to see for certain, is Michael Bourn in a Braves uni next season and Martin Prado signed to a long term deal.  I know Frank Wren doesn't have a money tree, but that's what I'd like to see.

Posted by diamondsanddugouts at 1:08 PM