A Decision Made Easier

All season long, Chipper Jones has described Michael Bourn as the Braves most vaulable player.  A player who deserves to represent Atlanta in this year's All-Star Game.

But Braves fans have been torn in the All-Star Game's Final Vote.  Do we vote in Chipper one final time, rewarding him for an unparalleled career?  Or do we vote for Michael, the clutch player who has been a human highlight film for the team all season long?  Luckily for Braves fans, the dilemma ended yesterday with Chipper being added to the NL roster as a replacement for injured Dodger outfielder, Matt Kemp.


"The one reason I'm really glad it happened today is because now we can all vote for Mike Bourn and get him there," Chipper said. "Mike Bourn has been our most valuable player this year. He has jump-started our offense time and time again. When he came over to shake my hand to congratulate me, I told him he was coming with. ... So we've got to get him there."

OK, Braves fans.  You heard what the man said.  Let's get Michael Bourn to the All-Star Game.  Voting ends on July 5th at 4pm and you can vote as many times as you want.  At last count, Michael was in last place.  So vote early and vote often! 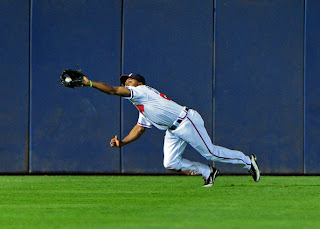 Posted by diamondsanddugouts at 3:02 PM