All streaks come to an end.  Hitting streaks.  Winning streaks.  And of course, losing streaks.  Let's face it, the Braves couldn't lose every Monday game until the end of eternity.  Still, this one went on awhile.  Longer than I ever thought it would.

The thirteenth Monday game of the year and finally a win.  Was it the high socks?  Was it Chipper on the twitta?  No, it was just time for the Braves to win on a Monday.

Truth be told, the Braves were actually 0-for-16 on Mondays.  Yes, this losing streak started last season.  It dates back to August 22nd.  Almost a year.

You could probably look for a reason as to why this one went on so long.  You won't find one, no matter how hard you look.  There's only one explanation.  It's just how baseball is.

As for the socks, every player and coach wore 'em high, except for Tommy Hanson.  He's either not very superstitious or he's just that confident.   It's gotta be the confidence.  After all, every baseball player is superstitious! 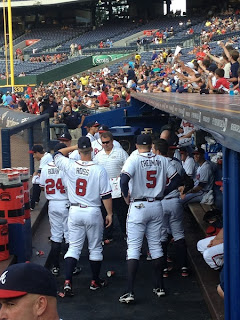 Photo couresty of the Atlanta Braves

Posted by diamondsanddugouts at 2:52 PM