It Was A Lovefest!

As I've said before, one of my favorite things about baseball is the tradition.  The respect that the players have for the game and for the players who have come before them.  And this was so very apparent throughout this year's All-Star Game.

As a die-hard Braves fan, I loved seeing Chipper being appreciated and honored by players and fans alike.  I loved watching Bryce Harper plant himself next to Chipper on the rail of the NL dugout, soaking up every bit of a once-in-a-lifetime opportunity.  Just as Chipper was in awe of Ozzie Smith and Cal Ripken Jr. at his first All-Star game, the tables have turned and he is the player that the youngsters want to emulate.  I loved watching interviews with the next wave of potential superstars, Mike Trout, Stephen Strasburg and Bryce Harper all wanting to talk to, sit with and learn from players like Chipper and Derek Jeter.

In yet another classy move, Tony LaRussa asked Chipper to address the NL squad before the game.  Chipper said he was surprised and very honored that LaRussa asked.  He even joked that he felt bad for his NL teammates as the AL team received a pre-game speech from Hall of Famer George Brett.  I don't think anyone in the NL locker room was complaining.

The Kansas City fans were just as appreciative of Chipper.  From the crowd response he drew during the All-Star parade, to the cheers he received during the team introductions, to the way the crowd (and players) saluted him as their cheers and applause rained down upon him during his only plate appearance, it was a wonderful tribute to a man who has always honored the game by playing it right.

For me, it's been fun watching Chipper have fun this season.  He's still playing at an unbelievable level, making unimaginable plays exactly when the team needs them.  He's still clutch.  You can tell when he's not happy about something.  Just look at those eyes and the way his jaw is set.  But he's smiling and laughing more than ever before.  He's learned to take a step back and appreciate every little thing in his last season.  One more lesson he learned from Bobby Cox.

In case you didn't get to see it, here is Chipper's pre-game address to the team, couresty of MLB.com 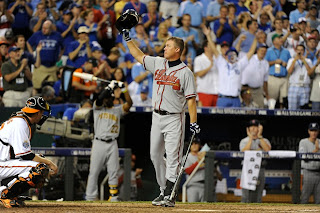 
Posted by diamondsanddugouts at 11:51 AM