This was not the post that I originally intended to write.  Yesterday afternoon my plan was to remind everyone to vote for Chipper Jones in the All-Star Game's Final Vote.  It was going to be a very inspiring post!  One that would rally my followers to vote and get our third baseman into his final All-Star game.  But that all changed in an instant at the start of last night's game when the breaking news was announced.  Tony LaRussa had added Chipper to the National League roster!  And Chipper responded in kind, showing us why he is an All-Star for the ages!!

At Sunday afternoon's game (yes, I sat through 9 innings in 105 degree temps) I was very disappointed to see that Chipper hadn't been named as a reserve on the NL squad.  I was thrilled for both Dan Uggla and Craig Kimbrell, two very deserving Braves players, but I thought that LaRussa would reward Chipper based on his career.  But, with Pablo Sandoval being voted in (?) by the fans, there was no way that LaRussa couldn't name David Wright as the reserve.  In hindsight, I think that LaRussa was waiting for the injured Matt Kemp to officially give up his spot.  And that spot, LaRussa was saving for Chipper.  Anyone who watched the number retirement ceremony for LaRussa and heard the comments that the former Cardinals skipper made about Chipper knows the respect that he has for the Braves third baseman.  LaRussa was going to have Chipper on his team no matter what.

And what a game Mr. Jones had!!  Here are the highlights/records set:

- Chipper went 5-for-5 for the third time in his career.  It was the first time he did it in front of a home town crowd.  And he utilized the entire outfield, spraying hits from foul pole to foul pole.

- Chipper extended his hitting streak to 10 games.  He is only the second player in Braves history to have a streak that long at the age of 40 or older.  He now sits in the company of Rabbit Maranville, who did the same in 1933 as a Boston Brave.

- Chipper stole his first base of the season, the 150th of his career.

- Chipper made an incredible catch-twist-throw-to-first fielding play in the top of the eighth, reminding us that he still has it in the field too.

After his 5th hit in the bottom of the 8th, Chipper was replaced by a pinch runner.  Braves fans let their feeling shine through!  As he walked to the dugout , Chipper tipped his cap to the crowd's thunderous ovation.  After hugs and congratulations from his teammates, Chipper gave the fans a curtain call.

In interviews before and after the game, Chipper's excitement about the trip to Kansas City, the one major league city he's never played in, shone through.  He spoke of the honor of being chosen and his excitement on sharing the experience with his sons.  In fact, that is what he is most looking forward to.

As for his thoughts on the game, there were two quotes that stood out to me.


"It was one of those dream games. I'd be hard pressed to find another game where I played better."


"Every time something cool happens, I cherish it." 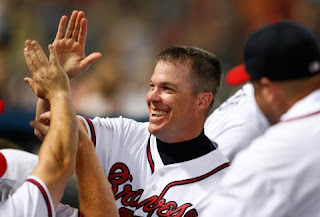 
Posted by diamondsanddugouts at 2:25 PM