The Face Of The Franchise

What a weekend at Turner Field!

It totally felt like the playoffs with a packed house every night.  The ball park was electric!!  Great vibe, great baseball and great, great fun!  Over 150,000 fans were in the house, most of whom were there to say thank you to Chipper Jones.  They travelled from far and wide, they brought signs and they were LOUD!  Next to me Friday night, a couple from Illinois.  Saturday, Louisiana.  Sunday, New Jersey.  They all travelled for one reason and one reason only.  To see Chipper Jones at Turner Field.

Honestly, I don't even know where to start with this post.  There are so many thoughts rushing through my head and so many emotions running every which way.  I'm always sad when the final home stand comes around but at the same time I'm excited as the playoffs are just around the corner.  As much as this weekend was about playing into late October it was even more about saying thank you to Chipper.

The Braves do a lot of things very right.  Ceremony is at the top of the list.  I've been to five number retirement ceremonies, a ceremony honoring Skip Caray, another honoring Bobby Cox and now, one honoring Chipper.  Friday night's ceremony was perfect!  From having Pete Van Wieren as the master of ceremonies, to the video tributes and the eloquent speeches, to the wonderful gifts, all leading up to the incredibly heartfelt words of Chipper himself, it was a truly memorable ceremony.  If you were there, you'll never forget it.

I'm not one who's all about the gifts but I was blown away by the thought that went into each and every gift that the Braves gave Chipper.  From his teammates, a custom billiard table.  The perfect guy gift.  In addition, they all wore mock turtlenecks under their jerseys just as Chipper always does.  We later learned that the team refers to them as nerdlenecks.   I guess Chipper doesn't command respect for everything.

From the organization itself, the gifts reflected Chipper's impact on baseball, the Braves and the city of Atlanta.  Representing his play at third base, Chipper was first given one of the special bases that were created specifically for the game.  Representing his impact on the community, John Schuerholz then announced the "10 for 10" project in which the Braves will refurbish ten little league baseball parks in Chipper's name, in and around Atlanta.  Representing the foundation he created as a cornerstone of the team, Chipper was then given a beautiful plaque featuring a home plate created from bricks taken from the facade of Turner Field.  A matching plaque will hang from where the bricks were taken.  Mr. Schuerholz continued on to say that Turner Field was certainly Chipper's home away from home, and to honor that the team is giving him his clubhouse locker.  What an incredibly cool gift!  That one put an even bigger smile on Chipper's face!  And finally, because he has had to spend so much time away from his family, the Braves are giving Chipper and his family a trip to Hawaii.  An amazing array of gifts that really represent every aspect of Chipper's role with the Braves.

Chipper was the final speaker and he truly spoke from his heart.  He was so appreciate of those who made this journey with him and helped him to achieve his boyhood dream.  Here's a link to the entire ceremony, courtesy of the Braves.  It's well worth the watch.

I really didn't intend for this post to be this long and I will never, ever be able to find the right words to convey how special today's game was.  It began with a message from Chipper played on Braves Vision. I'll admit it, I shed some tears.

As impossible as it seems, the cheers for Chipper were even louder today.  At the start of the game, he took the field alone.  The cheers were deafening and the outpouring of appreciation was overwhelming.  I saw the Braves stoic leader wipe his eyes more than once.  Chipper had said after Friday's game that he had been feeling a myriad of emotions and he was glad that the ceremony was over so that he could fully focus on the task at hand.  He had gone hitless on both Friday and Saturday but that ended with a hit on Sunday.  We were also soundly reminded that Chipper's not just a hitter.  He made three absolutely stellar plays in the field, the third being the best.  It's my favorite Chipper move, the bare-handed grab and side-arm throw to first to get the batter out.  No one does it better.

The game ended with a 6-2 Braves win and the team took the series two games to one.  Freddi Gonzalez had asked Chipper three different times if he wanted to be replaced by a pinch hitter or a pinch runner so that he could walk off the field for one more thunderous ovation.  Each time Chipper said no.  He wanted to finish the game on the field with his teammates.  And after the on-field post game interview, Chipper didn't take the steps down to the clubhouse.  Instead he walked to the stands, to the seats behind home plate and gave his mom and his dad huge, huge hugs.  It was so perfect.  Thanking the two people who were there from the beginning.  And in that moment, it was all too much for him.  As he walked back to the dugout we all saw the emotions come tumbling out.  We saw what this moment, this weekend, this team and these fans have meant to Chipper Jones.

There are still three regular season games left to be played and the division has yet to be won.  The regular season ends on Wednesday and the playoffs begin on Friday.  And that, Chipper says, is when the fun begins! 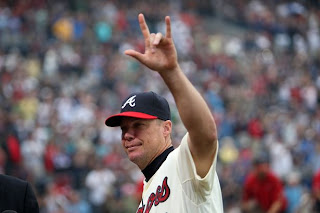 Photo courtesy of the AJC

Posted by diamondsanddugouts at 11:47 PM