Last Wednesday night in Milwaukee, in the top of the fourth inning, Chipper Jones walked for the 1,500 time in his career.  And that walk walked him right into the history books.

Chipper joined four others players with six amazing accomplishments.  They each recorded at least:

All these milestones were reached while hitting .300, with a .400 on-base percentage and a .500 slugging percentage.

It's inconceivable to me that there are still some people out there who actually think that Chipper Jones is not a first round ballot Hall of Famer.  They exist.  I've seen them.  I've spoken to them.  And I've told these people that they are nuts! 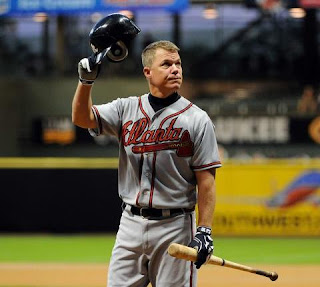