I'm disappointed.  Not with the gift but with the presentation.  Or lack thereof.

Don't get me wrong.  I don't want to pour salt into those old, festering wounds, but the relationship that the New York Mets fans have with Chipper Jones is one that's famous, or more appropriately, infamous.  It's a relationship that's been well documented over the years.  Tonight, Mets fans were denied a huge opportunity to put their feelings on display for all of baseball one final time.

Early in the season, when presentations were made in Houston and Denver, the obvious question arose. Would the Mets acknowledge Chipper Jones'  retirement?   Would it be insulting to Mets fans to honor Chipper on the field during that final series?   How would Mets fans react?   It turned into quite a brou-ha-ha.

The Mets presented Chipper with a piece of artwork that highlights all he accomplished at Shea Stadium.  The presentation took place Friday afternoon in a conference room somewhere at Citi Field, away from the field and away from the fans he tormented.  I found that disappointing.  The fans deserved to be a part of it, for better or worse.  Yes, it was relationship built on extreme dislike but it grew into one of mutual respect.  You can dislike someone while at the same time appreciate their accomplishments.  That is what the relationship between Chipper Jones and New York Mets fans has grown into.

Chipper was asked about it today.  If he were a Mets fan, would he like Chipper Jones?  With a wry smile Chipper replied, "I would respect the body of work, but I'd hate my guts."

The Mets honored Chipper in the manner they felt was most appropriate.  I respect that and I'm certain that it was a very classy presentation.  I just wish the Mets fans could have been involved.  The booing, the chants, it would have been perfect.  And without a doubt, Larry would have loved it! 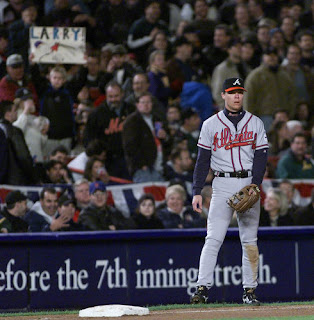 
Posted by diamondsanddugouts at 12:50 AM