Earlier last week, if you happened to be out and about, doing a little shopping in Gaithersburg Maryland, you may have happened upon this item. 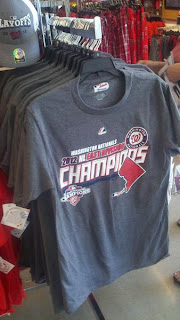 Really!?!  Hey Nats, that's a little insulting to the team a few states south of you!  You may be leading the division but y'all haven't won it yet.
Ok, I once worked retail and I know mistakes are made.  The clerk stocking the shelves at Kohl's probably didn't know that this item was "time sensitive" and the celebratory shirts would have probably stayed out on the sales floor had a shopper not snapped a photo.
I know what you're thinking.  No. It wasn't me.  I haven't been to Maryland in quite awhile.
The Nats were three games up on the Braves and had lost seven of the last eleven when this story broke.  Many a Nats fan was blaming Kohl's for jinxing their team.  I get it.  I believe in the power of the jinx.
Kohl's issued a statement, apologizing to the Nationals for the error.
"We apologize to the Washington Nationals, their fans and our customers for the confusion and inconvenience regarding the MLB National League Eastern Division championship merchandise,” Vicki Shamion, Kohl’s senior vice president, public relations, social marketing and community relations, said in an e-mailed statement. “We deeply regret this early unveiling and wish the Nationals the best of luck throughout the playoffs.”

Kohl's only apologized for spoiling the surprise of unveiling the logo.  I think that's off the mark.  The retailer has 26 stores in the Atlanta area.  Maybe another apology is merited?

The last regular season home game is today.  This is my fifth game in a row and the post season is on the horizon!  The Ted has been packed and the energy has been over the top!  SRO only today!!
﻿

Posted by diamondsanddugouts at 10:08 AM