It came as a surprise to no one when the Atlanta Braves announced that John Smoltz will be inducted into the Braves Hall of Fame this summer and his #29 will be retired and take it's rightful place high above left field with the team's greatest and most beloved players.  One of baseball's greatest pitching trilogies completes it's first full circle in the city where they created so much magic.

The three hurlers complemented each other perfectly to create one of the greatest pitching rotations in the history of the game.  Tom Glavine, the stoic finesse pitcher who made his living on the outside corner, confusing batters with his deceptive style.  Greg Maddux, the professor and artist who painted around the strike zone in a fashion that would have made Monet and Matisse jealous.  And John Smoltz, the tenacious, fiery and fiercely competitive power pitcher who dominated and overwhelmed batters time and time again.  He remains one of baseball's greatest post season pitchers and he is the only one of the three to be in a Braves uniform for the entire  14 year run as division champs.

John Smoltz never shied away from a challenge and he loved proving his critics wrong.  While Glavine and Maddux were each only on the DL once, John spent significant time there with multiple elbow and shoulder surgeries. He missed the entire season in 2000 due to Tommy John surgery.  Upon his return in 2001, he wasn't pitching effectively and he was incredibly frustrated.  Not one walk away from adversity, John moved to the bullpen.  Let me take you back there.


It's the bottom of the ninth inning. The sound of AC/DC's "Thunderstruck" is shaking the steel beams of Turner Field to the deepest part of its foundation.  In all caps, every video screen within sight flashes and spins one word...SMOLTZ!  Every Braves fan is screaming at the top of their lungs.  The door in right field opens and John Smoltz confidently runs to the mound.  Your spine tingles and chills run up and down your arms, even though it's a 95 degree night.  In your heart of hearts you know it.  The game is already won.  The poor schmuck in the batters box doesn't stand a chance...and he knows it.  Game over.  Yes, in 3 1/2 seasons John Smoltz earned 154 saves.

John liked closing but he knew he was born to be a starting pitcher and he wanted to go back.  The critics said he couldn't do it.  After all, no one had done it before.  But, there is only one John Smoltz.  And yes, he did it.  Fueled by the negative words of his detractors and naysayers , John Smoltz became a starter again and he stayed there for three more seasons.

Braves fans don't like the remember the way Smoltzie left Atlanta.  It wasn't pretty and there were bad feelings everywhere, the locker room, the front office and all over Braves country.  But as the adage goes, time heals all wounds and John Smoltz is back with his Braves family.

June 8th will be a very special night at Turner Field and every true Atlanta Braves fans should be there.  It will be a night to remember!! 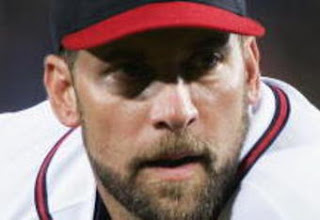