The Braves final Spring Training game was played at the ball park in Gwinnett at it was a total blast!!  The Atlanta Braves played a team consisting of Braves future stars, all currently playing within the organization.  The players came from Gwinnett, Rome, Mississippi, Lynchburg and Danville.  One of the biggest highlights was that the Futures team was managed by the one and only Bobby Cox!  It was great to see Bobby in a Braves uni again!  Coolray field had their biggest crowd ever and it was a fantastic night!  The only downside was that the game was cut short by rain.

We had almost seven full innings of great baseball, a MONSTER home run from Dan Uggla, very impressive pitching from the futures, Phil Niekro singing "Take Me Out To The Ball Game" during the 7th inning stretch and Chipper taking BP before the game.  There was a great chemistry between both teams and it was easy to see how much fun all the players were having.  That said, the Futures played a very, very strong game and in fact, they lead for most of it.  Who knows, they may have come back if it had gone the full nine innings.  I really hope this game becomes a new tradition for the end of Spring Training. 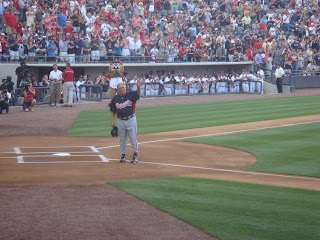 Chopper and Homer the Brave assisted in the player introductions.  It was a cool touch that the Future Stars wore the uni of their current team. 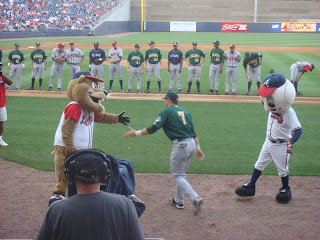 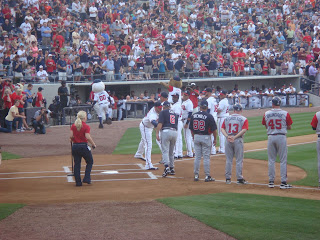 Dan Uggla at the plate, right before his massive home run.  I feel very good about Dan's first half of the season! 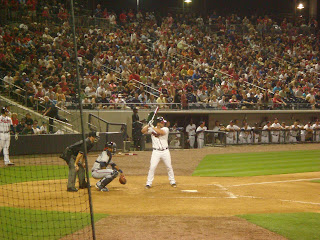 Posted by diamondsanddugouts at 12:05 PM