They say you can't have a favorite Uga. It's akin to having a favorite Beatle. It's simply not done.


But for me, Russ is, and always will be, my favorite Uga. Russ was special.


Russ didn't fit the mold. He didn't meet the criteria. He didn't have what was required to be Uga. He wasn't perfect. But that didn't seem to bother him.


Russ was always ready to step in when needed. He worked hard. He did the job right. He represented the university to perfection. He did it with a smile on his jowly face and with a wag of his stubby tail. He roamed the sidelines. He woofed at the opposing team. He posed for photos. He cooled off on his bag of ice. He did it without the title, game after game, season after season. He subbed for Uga VII. He subbed for Uga VIII. Russ was the quintessential bridesmaid.


You keep your head down, you do the job right and hopefully someone will take notice. Finally someone did. Whether it was the Seiler family or the university, someone put a ring on it and Russ became Uga IX. He was crowned. Or as they say in Athens, he was collared.


In 63 games over seven seasons, Russ went 44-19. He officially retired at the last home game of this season.


Russ passed away last night. He was 11. A ripe old age for an English Bulldog.


As it turns out, the imperfect bulldog was the most perfect of all. 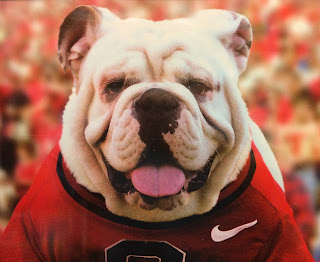 Posted by diamondsanddugouts at 6:52 PM