Baseball is a game of numbers.  Last night Brian McCann hit a big one.

For every boy that plays little league there is the dream, the dream of getting a hit in the majors.  Brian McCann has done it one thousand times in his eight seasons with the Atlanta Braves.

As he stood at first, the Braves marked the milestone on the jumbo-tron.  To look at Brian, it was business as usual.  Just another hit.  As the ovation from the crowd grew, Brian looked down and then thanked everyone with a big smile and the tip of his batting helmet.  It reminded me of a scene from a western movie.  The quiet cowboy tipping his hat and saying, "just doing my job ma'am".  That's what Brian McCann was doing.  His job.  And loving every bit of it. 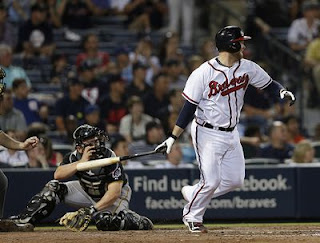 Brian McCann proves, everyday, what hard work and dedication will do for a ball player.  He leads by quiet example.  After the game, Freddie Freeman talked about the milestone hit saying, "It’s awesome, especially with the homer (for 999). It's more impressive to watch when he hits the lefty right down the left-field line. I love to see people go opposite field. To get it for your 1,000th hit off a tough lefty like that ... I've only been here three years to watch him, but it's been a great time."  Post-game, Brian leaned a bit sentimental.  “To get 1,000 hits here, it’s something I’ll never forget.  That’s something I’ll cherish for the rest of my life.”

So this is what I don't understand.  During the off season and throughout Spring Training, media and fans alike seemed to be obsessed with one thing.  With Chipper's retirement, who would be the Braves new team leader?  Me?  I think these things happen organically.  You don't tell someone they're the team leader.  Someone just slips into the role.  It happens naturally.  But the baseball lemmings had to be told and the Braves made it loud and clear on Opening Day.  As the team took the field from the center field gate, Jason Heyward led the pack.  For the past two seasons, that was Chipper's spot.  In 2013 it was Jason's.  My question?  Why wasn't it Brian McCann?

In my eyes, without a doubt, Brian McCann is the team's leader.  And he's proved it on and off the field for eight strong seasons. 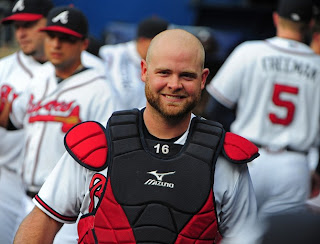 Posted by diamondsanddugouts at 5:30 PM