Give That Dawg A Bone!

This time last year Alex Wood was in Athens, packing up his stuff and heading home to Charlotte.  There he would wait.  He would wait for the major league draft and he would wait to see what lie in store for his baseball future.  On that drive north, I'm certain that Alex Wood had no idea that just over a year later, he would take the mound at Turner Field.

With his mom in tears and his dad hanging over the dugout and taking pictures, Alex ran out from the Braves bullpen at the top of the ninth inning.  I can't even imagine what his parents thought an inning earlier when they saw the sign in left field..."Warming Up In The Braves Bullpen #58 Alex Wood".  That's probably when mom started to lose it.

The pressure was low as the Braves were up 11-3.  Perfect situation for the rookie.  Wood gave up a single to Colby Rasmus but ended the inning by getting Maicer Izturius to ground into a double play.  He was so caught up in the moment that he didn't even think about the game ball.  Freddie Freeman, the bobblehead celebrant of the evening, tossed the trophy to his newest teammate.

Why now and why Alex Wood?  The Braves bullpen became one pitcher short when the team decided to carry three catchers.  Additionally, the Braves had suffered two huge lefty-reliever losses to Tommy John surgery.  Jonny Venters and Eric O'Flaherty are gone until next year and the Braves were suddenly pitcher-thin.  Righty Jordan Walden came off the DL but the Braves still needed another left-handed arm.  Alex, with his unorthodox delivery style, had impressed the coaches and players this past spring.  The Braves had drafted him in the second round of the 2012 draft and he was pitching well in Double-A Mississippi.  So, 24 hours after being called up, Alex Wood made his major league debut.

His best friend, former teammate and inspiration, Chance Versey was there early and watched batting practice from the Braves dugout.  As he took the field in the ninth, Alex said he could here woofing coming from the stands, very possibly from friends and some Georgia football players who made the trip down from Athens.  And then there were the parents.  They were fun to watch!

Alex summed his night up best.  "There's nothing like it.  I wish everybody could experience the feeling I had tonight at some point in their lives." 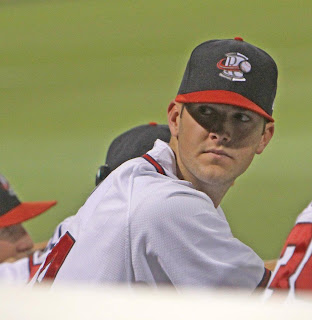 There is always a downside for one player when another makes his debut.  Third baseman Juan Francisco was designated for assingment in order to make room for Wood.

Alex Wood in a glance:

Redshirted the 2010 season after undergoing Tommy John surgery in 2009.

Invited to Spring Training in Orlando this season, then pitching in Double-A Mississippi.

Dad is a lifelong Mets (yikes!) fan and as a child, Alex split his loyalties between the two.  Hopefully that is now rectified!!


Posted by diamondsanddugouts at 7:39 PM