It's The Most Wonderful Time Of The Year

I freely admit it.  I wasn't happy that the Atlanta Braves were leaving Turner Field.  I loved the Ted!  I spent literally hundreds of evenings there, cheering my team, always there for Opening Day and hopefully still there late into October.  Turner Field was a beautiful ballpark with amazing views of downtown Atlanta.  Every out-of-towner I spoke with would ask why the Braves would ever leave such a beautiful park.  I spent the last two seasons mourning the slow death of one of my dearest friends.

Though my heart was sad, my brain understood.  The city of Atlanta didn't treat the Braves as well as they should have.  Years of broken promises and a history of being a bad landlord (the city owns the ballpark) the team seemingly always playing second fiddle to the Atlanta Falcons in the eyes of City Hall.  John Schuerholz and company took matters into their own hands and moved eight miles north.

I've been to Sun Trust Park three times now.  Once in October for a hard hat tour, a few weeks ago for a spring training game and last night for the Home Opener. My assessment?  The Braves did it right!  Is it absolutely perfect?  No, there are a few glitches to work out but the ones that I experienced in March were almost completely rectified by the Home Opener.  The biggest negative for me?  Ticket prices.  My seats doubled in price.  The organization definitely courted corporations.  Those who benefit from getting 'free' tickets from their employer, a company vendor or whomever will have an amazing experience with great seats and exclusive restaurants/clubs.  My concern is for the 'regular' people.  The parents who want to take their 2, 3, 4, 5 kids.  It will hit the wallet much harder this year than it did last year.  But baseball is a business and the players have to get paid somehow.  No matter the sport, this always comes with a new venue.

Now, back to what really matters.

In my world, Opening Day marks the beginning of spring.  Spring came a little late this year as the Braves were the last team to play at home.  It was worth the wait!!  Fans came early, way before the gates opened .  Tailgating, exploring everything the Battery had to offer and checking out the newly unveiled statue of Bobby Cox.  It's an amazing likeness and it really captures the essence of the Braves former skipper. 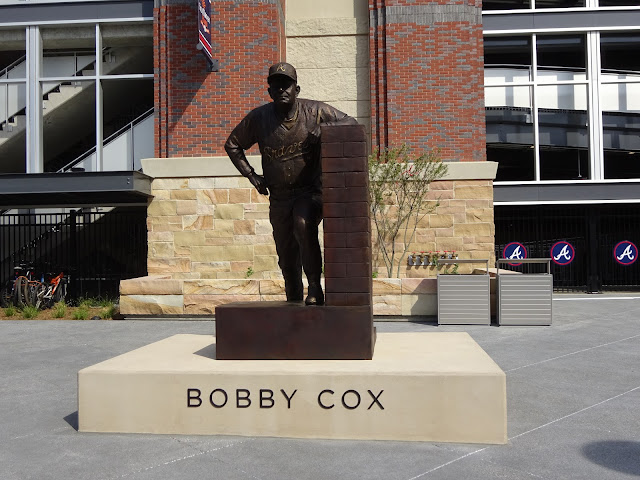 I love the energy, the sights, the sounds and the ceremony of Opening Day.  The smell of hot dogs wafting through the air, the crunch of peanut shells underfoot, the vendor who can be heard over everything yelling "cold beer" and the sight of that beautiful, pristine playing field!  The blades of grass almost waving everyone toward their seats.  I love seeing Walter Banks, a Braves usher since the team came to Atlanta, and then seeing and hugging my usher, Thelma, a beautiful lady who made the move from Turner Field.  Thank goodness!  I love finding my brand new tomahawk waiting for me in my cup holder, watching both teams being introduced, seeing the huge American flag being unfurled and most of all, the fly over!

The Braves do ceremony like no one else.  John Schuerholz addressed the sold out crowd welcoming us and making certain that we all knew that Sun Trust Park was built specifically for us, the fans.  The ballpark was built to be the best venue to watch a baseball game and to have the ultimate fan experience.  Everything in the park was in place, statues had been moved, memorabilia displayed, but saved for Opening Day was the unveiling of retired numbers.  A brief video tribute of each player preceded his number being unveiled.  The late Eddie Matthews and Warren Spahn were unveiled first.  As the following Braves legends were introduced, Phil Niekro, Dale Murphy, Tom Glavine, John Smoltz and Chipper Jones, the crowd went crazy!  Each player truly seemed to be savoring the moment.  Bobby Cox followed the players and though it seemed impossible, the crowd was even louder.  And then, the greatest Brave ever...Hank Aaron!  The cheering was truly deafening!  Hank's smile was ear-to-ear as he took the field and waved to the crowd.  He moves more slowly now and that's ok.  It gives the fans more time to cheer and it gives Hank more time to savor the moment.  And then, just as the last first pitch was tossed at Turner Field, so it began at Sun Trust Park.  Hank Aaron throwing the ball to catcher Bobby Cox.  I will say, Hank's pitch was much more on the mark this time!  Hank Aaron is an absolute treasure and we Braves fans are so lucky to get to see him, and honor him, so often.

As for the game, the ballpark was christened with a 5-2 win.  If you're a trivia buff and you have to answer any question regarding "firsts" at Sun Trust Park, always answer Ender Inciarte.  Chances are high that he's the right answer! 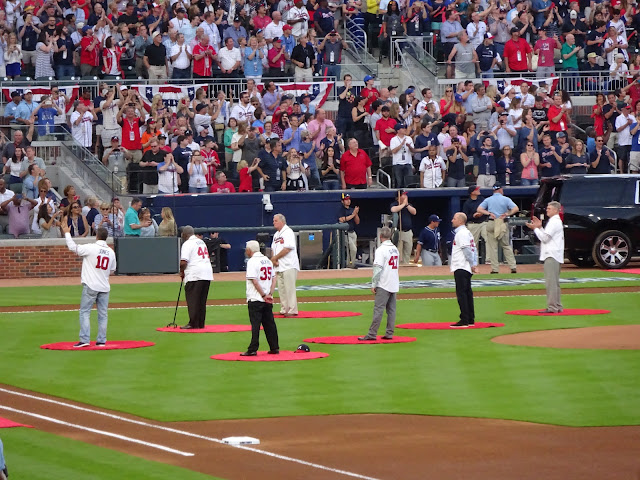 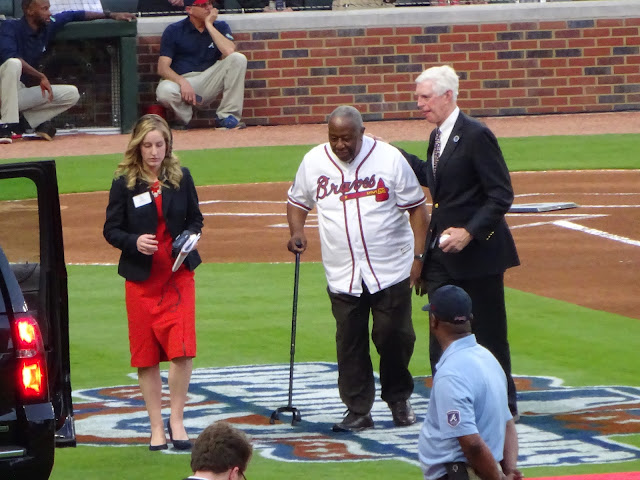 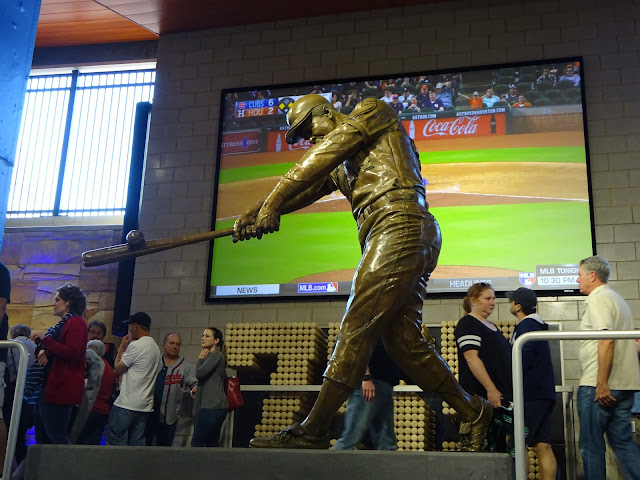 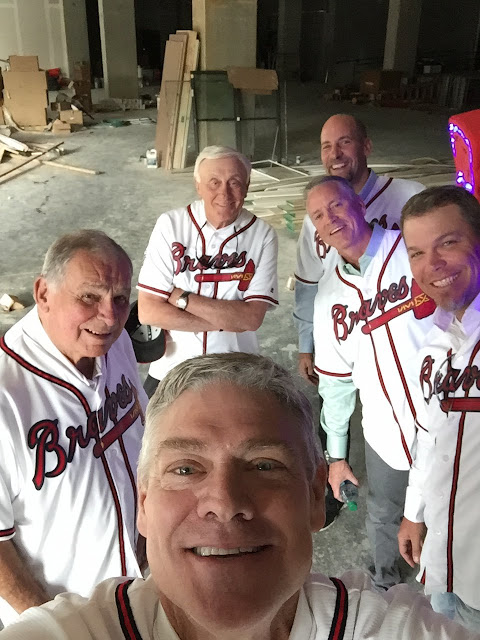 Posted by diamondsanddugouts at 9:08 PM